Champ points are awarded based on postseason success in the big four sports. The majority of points are earned on the basis of championships, but other deep runs into the playoffs are also rewarded. Champ points fade away over time, so the Champ Score is a measure of recent success.

The most recent winner of a championship in any of the big four sports is awarded 1 champ point. The winner of the MLS season earns 1/3rd of a champ point. Here are the winning cities from the past season:

Points are also allocated to the other teams which made the playoffs. We'll use the most recent MLB playoffs as an example:

Then the next group of losers is awarded ⅓ of that, or 0.11 points. But now these points must be shared among the two teams that lost in the final 4, the ALCS loser and the NLCS loser. So each of these teams splits the 0.11 points, receiving 0.056 points each. Then so on for all the previous rounds of the playoffs.

Below is a visual representation of the scoring, along with a chart of the exact points awarded during the last completed MLB Season. You'll notice a large drop-off in points awarded for short playoff appearances. The Champ Score is designed to reward championships and deep playoff runs. For this ranking, merely making the playoffs and being eliminated quickly is only slightly better than not making the playoffs at all. 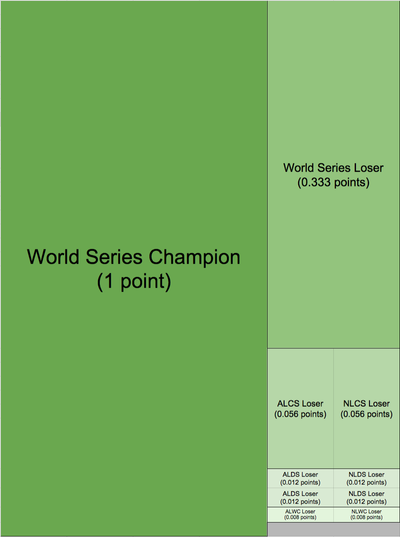 Both formulas are illustrated on the graph to the right (or below on small screens). In both graphs, you can see the value of the score go down as years elapse. For championships, this decay is both slower and longer lasting: a city still gets a small amount of points for a championship won 9 years ago. But for a non-championship playoff run, after 5 years those points will not count anymore ("nobody remembers second place").